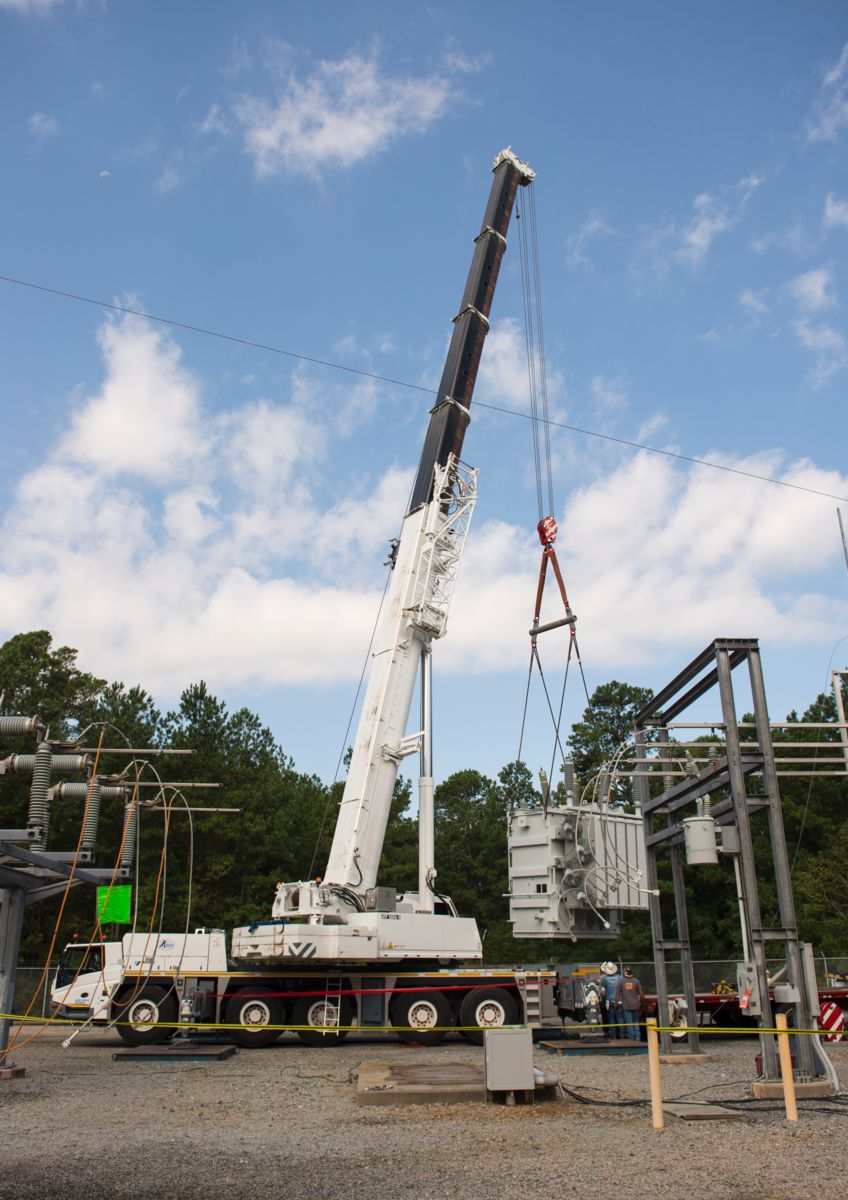 One of the success stories of the Irma restoration was the ability to shift load and backfeed circuits, particularly after the failure of a substation transformer just as the storm’s fury arrived. Instead of leaving several thousand members in the dark until a replacement transformer was installed, shifting load to circuits served by other substations allowed the outage experienced from most of these members to be shortened by over 48 hours.

Just before noon on Monday, September 11, the Clinton Substation transformer failed. This transformer, owned by Georgia Transmission Corporation (GTC), steps power down from 115,000 volts to 14,400 volts before it is distributed out to meters in central and northern Jones County. A replacement transformer costs well in excess of one million dollars and the nearest available was in Forest Park, 90 miles away. Weighing 97,000 pounds when filled with the 3,200 gallons of oil used for cooling, it had to be replaced by a large crane. GTC replaced the transformer as quickly as possible, and the station was up and running by Friday.

Preparing for a storm like Irma doesn’t happen the week before the storm. “We are constantly working to increase the reliability of our system,” said Lee Marsh, vice president of engineering. “Over the past 10 years, we’ve worked to rebuild lines with larger wire to handle more electric load. As we are working to finish reconductoring, we are also focusing on system automation to automatically backfeed lines in a power outage.”

During Irma, many circuits were damaged by fallen trees, and meters could not be backfed until those were repaired. Thanks to load shifting, power was back on to all but about 10% of the meters normally served by the Clinton substation by Wednesday night. This also restored power to critical
loads such as a school and county water system wells.

Throughout the Irma restoration, about 2,900 meters were backfed, speeding restoration for our members while lines were being restored. As we discussed in the April issue of Current Lines, the next step in this resiliency effort is system automation. This year, Tri-County began the installation of automated breakers which sense when faults have occurred and automatically shift load, almost immediately restoring service to many members.

“This will be a multi-year process, but the result will be decreased outage times for our members,” said Marsh. (67163001)