Charging is the next big hurdle for long-haul travel in electric vehicles, and the nation’s electric cooperatives could play huge roles in delivering sustainable solutions for their consumer-members and other travelers.

“Charging presents a challenge. We who live in and drive through rural America still charge our vehicles, but it often requires more creativity, more time, or help from a friend,” said Alan Shedd, director of sustainability for Oglethorpe Power Company. “Ready access to public charging is not commonplace in rural areas.”

The Touchstone Energy Drive to CONNECT Event, during which teams of co-op employees from different parts of the U.S. drove EVs to a conference in Utah, provided opportunities for real-time research on long-distance travel. The event involved the use of several different vehicles, including plug-in hybrids and a range of EVs produced by different manufacturers, and the research took into account the various routes, driving conditions and charging options.

An EV enthusiast for nearly 45 years and a national expert on the topic, Shedd has made many trips covering more than 200,000 miles using both plug-in hybrid vehicles and EVs. That experience has paid off in knowing when, how and where to plug in.

“I’m a member of four different charging networks,” Shedd admits.  But he still keeps extension cords, adapter plugs, a custom charger, tools and test equipment handy so he can plug in at a motel or other location where EV chargers are not available.

“There are still large areas of the country that are underserved,” said Shedd. “You don’t have to stray far from an interstate or urban area to outrun charging convenience.”

Road-Tested Travelers
Shedd was among the co-op staffers who spent several days in May learning firsthand about the challenges facing motorists traveling long distances in electric cars. While electric vehicles are gaining popularity for commuter use, with home and workplace charging options becoming more common, experience with long-range travel remains limited.

“Driving cross-country is part of the American psyche—the lure of the open road,” said Shedd. “We take the car for granted while not too many years ago a cross-country trip in a gas-powered car was a big undertaking and not altogether certain.”

Sharing their adventures on social media using the hashtag #DriveEVent, teams started out in six states with a goal of arriving in Salt Lake City on or before May 7 so they could discuss their travels at a pre-conference workshop.

While every team arrived in time, some faced more challenges than others. (18582001) 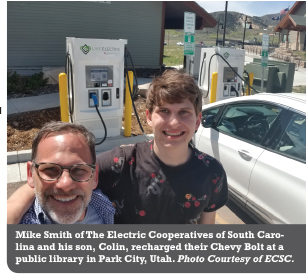 Mike Smith and his son Colin, 16, drove a Chevy Bolt from Cayce, South Carolina, to Salt Lake City by way of Interstate 80 and documented parts of the trip on Twitter.

“The route we chose had everything to do with charging availability and avoiding the mountains if we could,” said Smith, vice president of business and technology strategy for The Electric Cooperatives of South Carolina.

In Wyoming, they used a 240-volt dryer outlet to charge the car at one stop and a 50 amp campground power pedestal at another.

“We did a 5,000 mile road trip in a first-generation Honda Insight gasoline-powered car last year, and sometimes covered 1,100 miles a day,” said Smith, who traveled 2,116 miles one-way to Utah. “This time we had trouble doing 300 to 400 miles a day through Nebraska and Wyoming because of the lack of fast chargers.”

This is what we had to use on the last half of our trip,” Smith added  “If we are really desperate for a charge, which we weren’t this time, we can get a Level I charge from a standard 20 amp 120 volt outlet, delivering a paltry five miles of driving range per hour. At that rate, a full charge would take about 46 hours for our car.”

“We could drive for about three hours and then we had to charge for six,” said Colin Smith. “Our days and nights got mixed up towards the end. When the car was fully charged, we went; but when the car needed a charge we stopped and slept while the car was charging.”

Two employees of Melrose, Minnesota-based Stearns Electric Association made much better time in a Tesla Model S, in part because they had access to Tesla’s fast-charging network.

Amanda Groethe and Whitney Ditlevson, who staff Stearns Electric’s communications and marketing department, made the 1,216-mile trip to Salt Lake City with just nine recharging stops, and none of those lasted more than two hours.

With planning, they were able to time charging stops to coincide with meal breaks or sight-seeing, and the Tesla charging stations were always conveniently nearby. (78091004)

“Generally the Tesla was fully charged by the time we were done with everything we wanted to do,” said Groethe. She added that on a typical road trip with her family, she’d stop every two or three hours to see to the needs of her younger children.

Teams from Montana and Colorado also completed the trip, but William Boyd Lee, vice president of strategic planning at CKEnergy, faced big challenges trying to get his Chevy Bolt from Binger, Oklahoma, to Salt Lake City.

Lee and his son, Jay, 27, decided to tow his EV to Salt Lake City from Oklahoma with a gasoline-fueled F150 pickup truck, but his data will help provide a comparison to EV travels to be discussed in a Touchstone Energy national webinar.

“Increased consumer demand for EVs and the need for manufacturers to ensure that charging options are available will create opportunities for private-sector investment in charging stations,” said Lee.  He added that it could also offer new markets for power sales for electric cooperatives.

“With more automotive manufacturers entering the EV market, there’s a lot of incentive for building out a reliable charging network,” said Lee. “Electric vehicles are going to be a huge part of our world in the years ahead.”