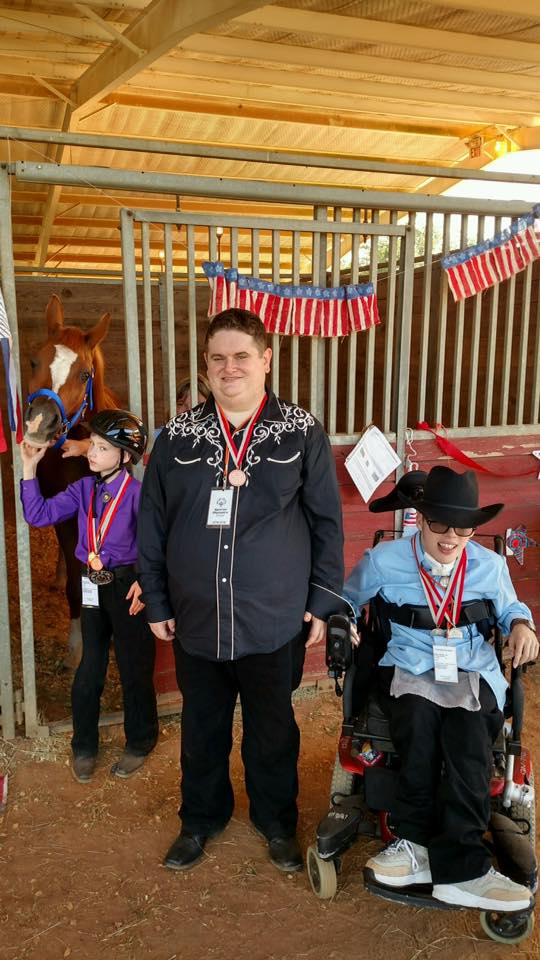 Shannon Thompson has been an equestrian most of her life but never fully realized the healing powers of horses until she started Brave Meadows Therapeutic Riding Center.

“The inspiration for the riding center came from my Uncle Marc,“ said Thompson. “He has Down Syndrome and has always been the center of our family.”

Bobby Hill, age 15, is a great example. Bobby was born with spina bifida and hydrocephalus and was one of Shannon’s first riders when he began riding at age six. “When he first started riding he never really talked much,” said Kathryn Hill, Bobby’s mother. “Within the first few times of riding, he started talking to the horses like they were people – a huge accomplishment for him.”

Two years ago, Bobby suffered a brain injury that left him paralyzed. He had to learn to move all his muscles again – even relearning how to blink his eyes. “That was just 2 years ago, and this October he won 2nd place in the Special Olympics. The Special Olympics really gave him something to work towards and helped to retrain his muscles.”

Bobby was one of three riders who recently travelled to Gainesville, GA in October to compete in the Special Olympics. Partially funded by an Operation Roundup Grant from Tri-County EMC, the three riders competed in different classes, some involving patterns on horseback, some involving the rider leading the horse around the ring on foot.

Riad Akhras attended the Special Olympics and competed in 2 events. He’s been riding at Brave Meadows for 5 years and looks forward to riding every Saturday. “I like the horses,” said Riad. “I felt nervous when I first started, but then I learned to trust the horses.” Josette, Riad’s mom, has been pleasantly surprised with the benefits of horseback riding. “It’s definitely helped with his confidence,” said Josette. “It’s a good opportunity for him to get out and do the best he can.” Riad also organizes the barbeque held each year at Brave Meadows and helps with other community events the organization puts on for the community. “It makes him feel like he is contributing and is a part of something.”

Taylor Gryczan has been riding since February and won first place in Western Horsemanship at the Special Olympics. Taylor’s mom, Erin, was looking for an outside activity to help with Taylor’s autism. They tried T-ball and bowling, but nothing was as enjoyable to him as riding. “He looks forward to it each week,” said Erin. “He always says ‘I’m ready to ride!’”

Aside from Brave Meadows, Shannon is also a full-time teacher. When the students are riding, she makes an effort to incorporate lessons from school into their riding time. Whether it be numbers or vocabulary, there is usually a simple way to reiterate the lessons from the classroom into the ride.

Riders have a wide array of diagnoses, but all benefit from the riding. And it’s a networking opportunity for the parents, too. “Everyone has different diagnoses, but we all worry about the same things. It’s nice to talk to other people that understand what you are going through,” said Kathryn.

Brave Meadows is a 501(c)(3) non-profit organization. Most of the horses are donated to the center, but they rely on contributions from the community to keep the horses in good health and keep the center going. To learn more, to make a donation or to volunteer, call 478.319.0203 or email bravemeadows@msn.com.